Let’s talk about systems and why they’re awesome.

I’ve been asked quite a few times in various settings about my thoughts on mod development and design. It doesn’t feel like it, but Thermal Expansion has been around for over five years now. In that time, I feel that I have become a much better modder both technically and creatively. Given that, my ideas and understanding of what constitutes good mod design has changed somewhat over the years.

So with that in mind, I’d like to take a couple of these posts and talk about some mod design concepts that I try to apply to all my work - Consistency and Flow. For this post, I want to focus on consistency.

If you look up consistency on Google, I’m referring here to, “conformity of the application of something,” meaning the creation of systems of rules and standards and then typically sticking to them. In my view, this benefits both the player and the modder. I’ll try and touch on both viewpoints, but they do dovetail nicely, because with the exception of McJty, players and modders alike are human.

From the modder perspective, consistency means that I can code in a very elegant way. I don’t want to get into the details of Java programming in this post, as it could easily be a series on its own. Don’t worry, I’ll probably end up doing that at some point. What’s important to understand right now is that on a high level, something you should know is that it’s an Object-Oriented framework and that there is a feature called Inheritance.

The framework means that I can code in such a way that I think about any given machine in the world as a discrete object and tell it to do a particular thing. For example, “Hey you - Pulverizer in the corner - do your update routine.”

Adding inheritance to the mix means that I can skip a LOT of effort duplicating. For example, an Induction Smelter and a Pulverizer actually have the exact same tick process. Here it is: 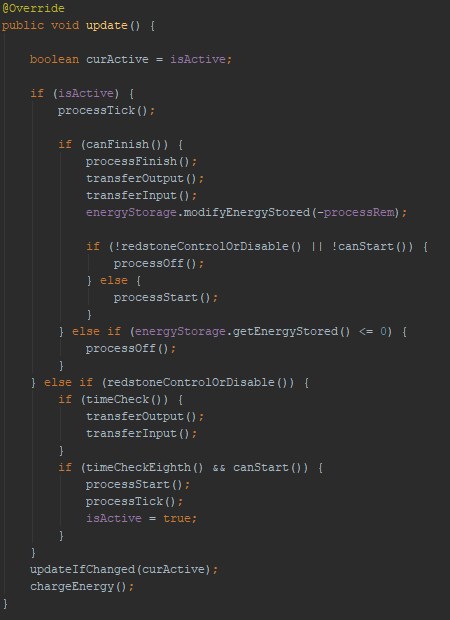 In fact, everything in Thermal Expansion which is a “machine” works this way. What inheritance lets me do is add a twist or extra tiny bit of functionality without completely copying over a bunch of code. If you’re wondering why that is such a benefit, consider that if I copy-paste and make an adjustment, I now have twice the lines of code to maintain. And if I have a new idea, such as Augments? I just add that to the base (or parent) class and it will uniformly apply to all blocks of a type. Also, it serves to modularize the code and let me think about problems in smaller terms. Divide and conquer.

With that rationale in mind, here’s the update routine for the Fluid Transposer: 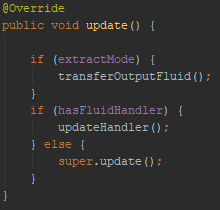 And basically, that translates into, “If you have a bucket/tank or something of that nature, do X. If not, do Y.” It just so happens that Y is the exact same process as every other machine. And by separating it into sub-processes, it’s easier to think about and maintain.

See what I’ve done here? I have a system. It’s consistent, elegant, and reduces the amount of copy-paste (and potential new errors) that I had to do to make a multitude of different machines. And consistency in the code leads to consistency in gameplay, which benefits players more than they even consciously realize. So it’s a bit of a head fake. Allow me to elaborate.

Humans are really good at recognizing patterns. The human brain is a well-tuned biological pattern-recognition machine which has evolved over a really long time. Don’t get too full of yourself - it’s a common feature to most animals, but humans are especially good at it1. Humans are also extremely social creatures, which means that this ability has a number of beneficial implications for learning and making sense of a world. This applies in real life, video games, and especially an artificially constructed world such as the Minecraft sandbox.

So, if you’ve played Thermal Expansion through its many iterations, you may know that the block recipes have changed a few times over the versions. However, I’m willing to bet that for most of you veterans out there, you quickly figured out what I had changed with the new recipes. Also, I bet that if I asked most of you seasoned players to guess the components in the unreleased machines that I wrote about a couple of weeks ago, you would come up with lists like this:

Actually…I’ll leave the Arcane Ensorcellator for you to imagine in your own minds. For those of you who are unaware, it’s a machine that enchants things. Try and come up with a list.

I bet it looked a lot like the list for the Alchemical Imbuer. It’s a Machine, so there’s a Machine Frame. It uses power (RF), so there’s a Reception Coil. All Machines have 2 gears, so obviously two of those. The other items? Hard to say, but the top item is probably Enchanting related. Maybe even an Enchanting Table.

Scroll down to the bottom for the actual recipes. Were you close? I’m betting you were.

Obviously, Thermal Expansion does not have a monopoly on this concept. Think about Tinkers’ Construct - there’s absolutely a consistency to the process of making a tool. You melt the metal in the smeltery, pour it into molds to make the parts and then assemble them. The materials used change the properties of the final tool, but the process itself is the same. Now, those of you familiar enough with Tinkers’ Construct know that the amount of parts and the nature of those parts also changes with the tool - between 2 and 4 parts of different types for different tools.

That brings up a point I hinted at initially - consistency does not have to be absolute. Think about Devices - no Upgrades, no Augments. Dynamos and Machines have both. Cells, Tanks, Caches, and Strongboxes? Upgrades only. For the sake of gameplay, that makes it interesting, and removes tedium. Admit it, it would be miserable if you had to upgrade AND augment every block in the mod, and your inner perfectionist would demand that you do so. It could turn an essentially beneficial mechanic into a feeling of unrelenting grind.

I should mention at this point that if you’ve played Thermal Expansion 5+ for any length of time, you already know what I mean when I write “device.” It’s a block. You can reconfigure the sides. It can auto-input or auto-output if appropriate. No upgrades, no augments, and it doesn’t require RF. It might interact with the world, and it’s going to require Copper and Iron to build the frame, and a Redstone Servo instead of a Reception Coil. Consistency. And I didn’t have to write a manual to teach you that2. A few minutes in Creative mode combined with some curiosity, tooltips, and JEI, and you’re good.

So, to summarize - I write code to make systems. Those systems happen to govern the behavior of blocks, materials, and gameplay. That makes things easier for me and allows me to add twists and new features to existing gameplay with a bit less effort. For players, Consistency makes it easier to learn and remember facets of the mod, and provides a framework where a new player has a much easier learning curve.

Of course, this isn’t the only tool in the modder toolbox. I’ll write about what I call Flow in Part 2 next week. Consistency tends to be a prerequisite, but not always, and there can be a beautiful interplay between the two. In any case, thanks for reading. :)