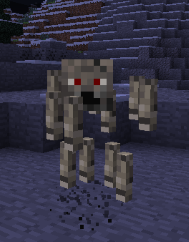 Basalzes closely resemble blazes. This is because both mobs are elementals, with blazes being fire elementals and basalzes being earth elementals.

Basalzes make muffled breathing sounds, as well as a sound that sounds like falling stones.

Basalzes spawn in mountainous and/or barren biomes such as extreme hills. They spawn on solid blocks at light level 8 or less. Basalzes spawn in groups of 1-4 and are rarer than most other mobs.

When killed by a player, basalzes may drop up to two pieces of pulverized obsidian, and may drop one basalz rod. They drop more items if a Looting enchanted weapon is used.

When idle, a basalz wanders around on the ground. When it sees a player, it starts flying and attacking. Basalzes attack by shooting “basalz bolts”, which are projectiles that deal damage and may apply the effect Weakness II for 5 seconds.