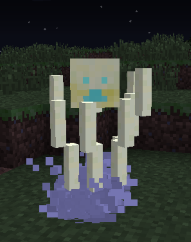 Blitzes are hostile mobs found in deserts and savannas. They drop blitz rods.

Blitzes closely resemble blazes. This is because both mobs are elementals, with blazes being fire elementals and blitzes being air elementals.

Blitzes spawn in deserts, savannas and similar biomes. They spawn on solid blocks at light level 8 or less. Blitzes spawn in groups of 1-4 and are rarer than most other mobs.

When killed by a player, blitzes may drop up to two pieces of niter, and may drop one blitz rod. They drop more items if a Looting enchanted weapon is used.

When idle, a blitz wanders around on the ground. When it sees a player, it starts flying and attacking. Blitzes attack by shooting “blitz bolts”, which are projectiles that deal damage and may apply the effect Blindness II for 5 seconds.