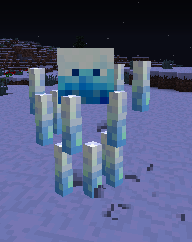 Blizzes closely resemble blazes. This is because both mobs are elementals, with blazes being fire elementals and blizzes being ice elementals.

When killed by a player, blizzes may drop up to four snowballs, and may drop one blizz rod. They drop more items if a Looting enchanted weapon is used.

When idle, a blizz wanders around on the ground. When it sees a player, it starts flying and attacking. Blizzes attack by shooting “blizz bolts”, which are projectiles that deal damage and may apply the effect Slowness II for 5 seconds.